It’s Year of the Tiger

I’m back from a super hectic past few months! But now that the transition period is (mostly) over, I can focus more on creating and sharing what I love! Something by Vera’s 2022 starts now, and we’re looking forward to being more present.

First task in being more present is having a new storefront at Shop Handmade Hawaii. The host is locally owned and so are the other shops. There’s no accidentally buying something dropshipped when you wanted to support small, local businesses.

Another goal I have this year is to return to in-person craft fairs! So, follow me on my socials or subscribe to the newsletter (sign up below) to get the updates on events that’ll Something by Vera will be attending.

Tom the Tiger was made using a crochet pattern by Janine Holmes at Moji-Moji Design and is available at Amigurumi.com.

I wish you all a prosperous year ahead!
-Vera

Processing…
Success! You're on the list.
Whoops! There was an error and we couldn't process your subscription. Please reload the page and try again.

Join using the form below! I promise, they won’t clog your inboxes. These newsletters will include what’s new, what’s upcoming, sales/coupons, and news. Once at month, at most!

Processing…
Success! You're on the list.
Whoops! There was an error and we couldn't process your subscription. Please reload the page and try again.

This is called the Trifle Tumbler. The sewing pattern is by Sara Lawson at Sew Sweetness. It’s part of her Minikins Season 1 collection of pouches and small bags. The Trifle Tumbler is available in 3 sizes, but my patience at the time only managed to make the two larger sizes. This particular one tested my skills in sewing along curves and using binding.

I may have gained experience working with circles, zippers, and binding, but the most important lesson I learned here is that your project is limited to the size of your sewing machine’s bed.

The fabric is another (shorter) story. I was in line for the fabric table at Walmart, when I saw the person before me was buying this fabric. It caught my eye coz it was a cute “Hawaii” themed design. At the time, I was in a souvenir making frenzy. So I thought this would make a great addition. So a few yards were purchased.

Anyways….I may not make this one again (unless specifically requested). I still have the last size unfinished. We’ll see.

After maybe a year and a half on the waitlist, I finally got the call! A locker has become available at the local craft store!

Thursday, I receive a call about lockers being available on “all levels.” There are 4 levels of 17-inch lockers, my first choice was one at eye-level or second from the top. But they’re “first come, first served,” so I dashed over as soon as I could. When I got there, there were none available at my preferred level, one available at the third level, maybe two at the top level, and a bunch on the bottom level. Imagine if I waited until we were in the area, I’d probably have to deal with a bottom level! Not that the bottom is bad, but it’s just not my preference.

At first I thought a top one would be good. Then, I realized I’m probably too short to tend to that level properly. In the end, I picked one at the third level. It is low enough where I could comfortably sit on my knees while I tend to my locker.

Move-in day was the next Monday! I got a call notifying me of my SKU number (so the store can pay me what I sell), and I dashed over again to put some stuff to replace the generic “Coming Soon” sign the store puts.

The first thing I did was take measurements of the locker. Some lockers have made walls or installed “wallpaper.” That’s not in my plans yet, but I figure now is the best time to measure. I put some things that I think will be quite the visual and offered different price ranges. The inventory notes I took were detailed down to the number of cards I put in. The nerd in me wants all the data! Like how many people were interested enough to take a card or brochure?

I’ve yet to feel the effects or visit my locker again.

Something by Vera’s My Locker (#47) is located at HouseMart Ben Franklin Crafts in Mapunapuna, 2810 Paa St, Honolulu, HI 96819. What kinds of things do you like to see at “storefronts” like this?

Today’s project is Kenny the Giraffe by One and Two Company.

Their patterns are all so cute! This one was made next by request.

The pattern itself was very easy to understand. An experienced crocheter can easily complete one in a week or less. This is also simple enough for any beginner willing to learn, because there are no special or complicated stitches you need to learn.

On December 10, Villages of Kapolei Association held it’s first Winter Fair! I had fun and my booth had a great response from fair-goers!

This being my first booth, everything was still in testing mode. Will this table layout work? What will be the most popular items? No amount of research can equal what lessons experience can give you. I personally ended up overpacking. Three car loads’ worth! I was not sure what kinds of tents and props I would need. It was well worth it though, and I did not have a feeling of “I should’ve brought this/that.”

As far as popular items, I was not prepared. I knew Pokémon items would be popular, but did not make enough. I lost a few sales because some character plush I had needs to be made to order. People like to take home stuff now! I did however make in bulk a number of smaller items like hair clips and pins, easy to make items. Those were not as popular as those that take more time to make.

I was pleasantly surprised that Dumpling Kitty sold out! They will definitely go on my list to make for next time! How can you resist that little kitty’s face! Overall popular items were described in one word…Cute!

It was  a tiring day and I’m very thankful for the help I had for that day! I will definitely aim to be in the Spring Fair next year and be better prepared. Some words of advise for those hesitating and still considering having a booth/table at an event, just go for it! Don’t overthink your work, because the passion shows. My most popular items were born out of love and not with intention to sell.

This project was finished before my website, and why not re-introduce it on its national day!

For more info and to order your own amigurumi bear, click here.

Since it’s release, I’ve been playing this game the best I can! Being a stay-at-home-mom, I’m not leveling up as quickly as others. But my crafty side is always finding something to make! So here’s a non-crochet, non-yarn craft.

Since I leveled enough to pick a team, why not make some stickers!

Not much new stuff lately. I’ve been working on a special gift for a friend in between orders. (That I’ll post about once the gift is given, just to be sure ;))

In the mean time, the shop page for Sophie’s Universe blanket is now live. You can view info about the blanket and order yours here.

I’ve also finished another Lalylala doll, so watch out for my post about it! Once I can get photos that is.

We recently bought a new dining set, and found a perfect centerpiece at the thrift store. This created a need for something to protect the table from the glass edge of the bowl. It was a perfect chance to make the Charlotte square from lookatwhatimade.net!! (link below) 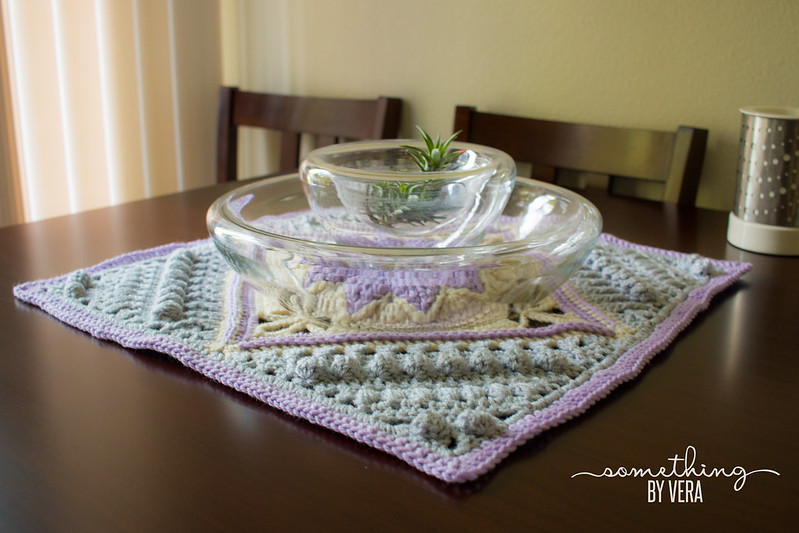 I didn’t complete the last part since I didn’t want it to be too large for my table. After blocking, the square ended up being 20 inches.

This kind of beauty does not come “cheap.” Like the designer’s Sophie’s Universe CAL, the instructions need a bit more focus and you may not be able to recall what happens on your show. But the result makes pausing Netflix well worth it!